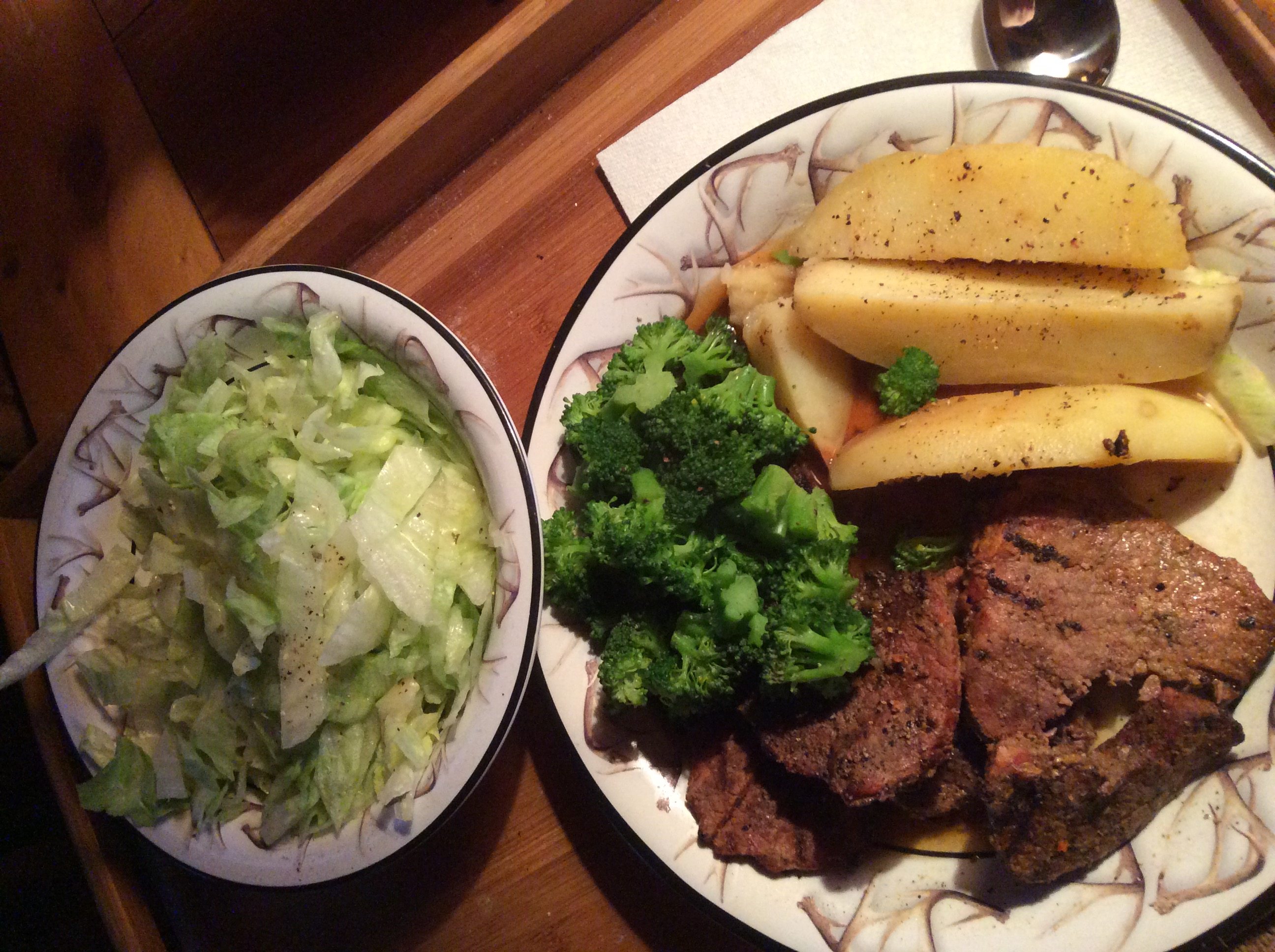 Alrighty then. It’s been a couple of weeks since I checked in regarding training for the Beachbody Classic, which if you recall is a “Physique” contest that Amy and I are doing this summer. Anyway, the Fitness aspect is moving long well. I’m following the Body Beast program, in which I’ll workout on average ~30 minutes a day. These are the morning workouts, performed 6 days a week. In the afternoon I’ll do a second workout that focuses on a different part of the body than the morning. I’ll also use different lifts to pick up areas that I might not be working enough during Body Beast. In all, the workouts are coming along nicely.

The big topic of the day, however, is Nutrition. We started a “Meat and Potatoes” plan about 2-weeks ago. Although it’s not drastically different from the way we normally eat, there are slight differences. The first is replacing simple sugars as much as possible with starches. The second is reducing fat intake. The third is the addition of large amounts of protein. For the most part, you end up with meals that look like the one pictured. And since I’m trying to gain muscle mass, I eat this twice a day, plus oatmeal and eggs for breakfast. Amy eats about half what I’m eating.

The result of these simple tweaks has been pretty impressive. Over the past couple weeks I originally lost 7 lbs, and have regained back about 4 (which must be muscle, because it sure isn’t fat – that’s actually disappearing from my waist). Amy has lost 7 lbs, most likely all fat because she’s toned up considerable – a lot of definition in her legs and back. All-in-all, not too bad. So all this got the scientist in me asking, “How this is happening?”

As background, food entering your body is geared toward biosynthesis and energy. Biosynthesis at the protein-level includes things like enzyme production and muscle & tissue growth. The precursors for these come from consuming protein (which is broken down to amino acids and then rebuilt into the proteins you need). On the small molecule level you produce a number of compounds such as nucleotides, hormones, phospholipids and prostaglandins. A small amount of fat, which contains a variety of molecules, serves as the precursor for making many of these small molecules.

On the energy side, you are dealing with a balance between burning and storing energy, which, mind you, has a time component. Glucose is your primary source of energy, and in your diet stems from simple sugars that are almost immediately absorbed into the blood when eaten. Starches, which are also carbohydrates, take longer. In your digestive tract, they first need to be converted into simple sugars before absorption into your blood. There are also different kinds of starches such as rapid-digestion (RDS), slow-digestion (SDS) and resistant (RS), which are like they sound – being digested at different rates or not at all. Fats, on the other hand, don’t convert to glucose in the gut. Instead, they turn into fatty acids/triglycerides, combine with other fat-soluble nutrients, and are transported in your blood in what are known as chylomicrons, which also contain some proteins such as apolipoproteins.

Now, we need to take pause here to understand that all the forms of energy that you consume, if not used immediately, are ultimately stored for later. So, if you are in immediate need of glucose, you’ll use it immediately upon eating. Any in excess will first be used to form glycogen, which is essentially a bundle of glucose that is stored in the muscles and liver. The glycogen is important because it gives a ready reserve of local, short-term energy – you’ll generally tap into it when exercising. After recharging any glycogen, any remaining glucose is converted to adipocytes/adipose tissue (i.e., body fat). Remember too, we have two sources of glucose – the simple sugars and the starches. The simple sugars go from start-to-finish (eating – to – energy or storage) rapidly after eating, whereby comparison the starches (because of the required digestion) “trickle” into your system. As a result, these sugars and starches are always working – at different rates – to provide energy, recharge glycogen and convert an excess into body fat. Fats (that you eat), on the other hand, will only be used immediately as energy when you are completely depleted of sugars, starches and glycogen – which is rarely the case. Instead, a small amount is used for biosynthesis as described above, and the rest is transported around your body and stored, which might take the better part of a day. In total, a way of thinking about these energy sources is: Sugars – Fuel for Minutes, Starches – Fuel for Hours, Fats – Fuel for Days. 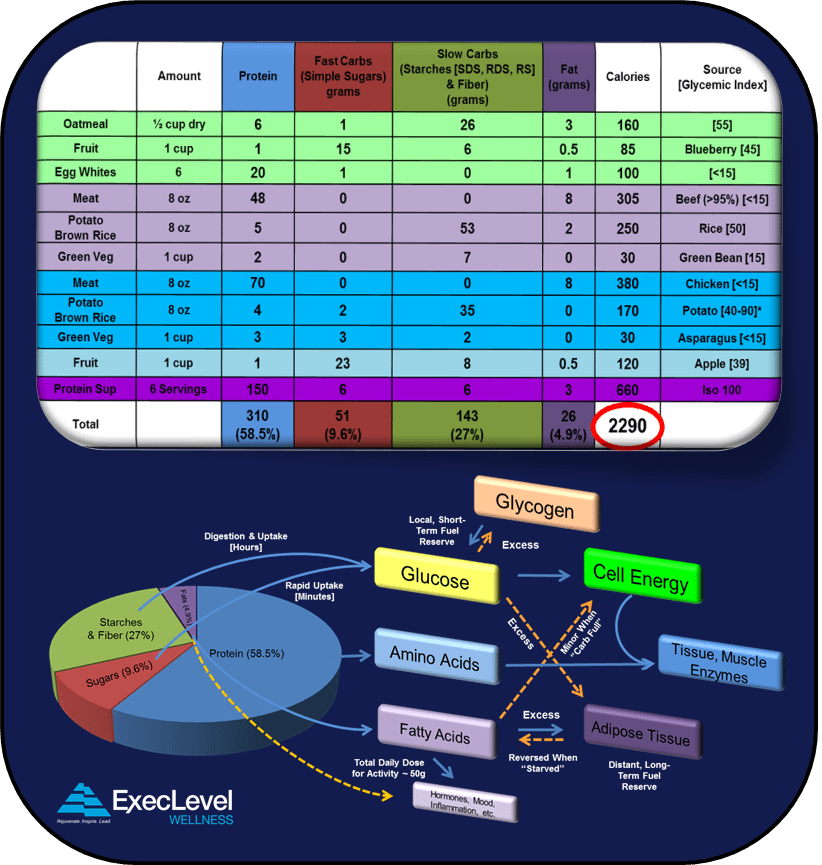 So now we reach the interesting part of this whole exercise (at least for me). Like I said, we changed our diet only slightly – with the biggest differences being that of swapping out sugars with SDS’s (slow-digesting starches), as well as upping the amount of protein we consume. The thing I left out is we are actually eating more calories per day than we did previously. The bulk of this calorie increase comes from the protein – which is not a good source of energy for your body (i.e., it comes into play only after you’ve eaten it, made your own protein/muscle, and then started to starve to death). So the biggest change is the balance between sugars, starches and fats. Essentially, on this revamped diet I’m taking in a minimal amount of fat, so nothing is being stored (and also running slightly carb-depleted, so I’m burning whatever fat I have). As far as carbohydrates, the SDS’s essentially give me an even supply of glucose over a much longer period than the same amount of sugar (which would be driven to fat storage shortly after consumption), so I’m not really ever hungry. In short, I’m full all the time, losing body fat and gaining muscle.

In the end, I hope you all find this as interesting as I do. Although I’ve tried to explain it relative to the way I eat, it really goes a long ways toward understanding why something like a Big Mac Value Meal (BMVM) is about the worst thing you can eat on a routine basis. If you look at composition, 2 plates of food shown above contain ~ 1,100 calories. Approximately 53% of the nutrients are protein (~530 cal), and the rest is made up of 2% sugars (~20 cal), 38% starches (~390 cal) and 7% fat (~160 cal). In contrast, a single BMVM, although slightly higher in calories (~1,330 cal), contains only 11% protein (~120 cal). The other 89% is energy-bearing nutrients that cover the whole time-spectrum. There is enough sugar alone in the BMVM (31%, ~ 340 calories) to run your body for > 2-hours. While your body is trying to use this up, glucose made from starches (38%, ~420 cal) is directed to storage. The worst is the fat (20%, ~470 cal), which now can do nothing in your body but to turn, gram-for-gram, into adipose tissue (body fat). Essentially, if I was to calorie-wise substitute BMVM’s for my food plates, I’d gain a gain a pound of body fat each week, and hardly any muscle (because of too little protein).